Literally I’m smiling from ear to ear as I write this.

Because my article was just published in FORBES! YES!!! 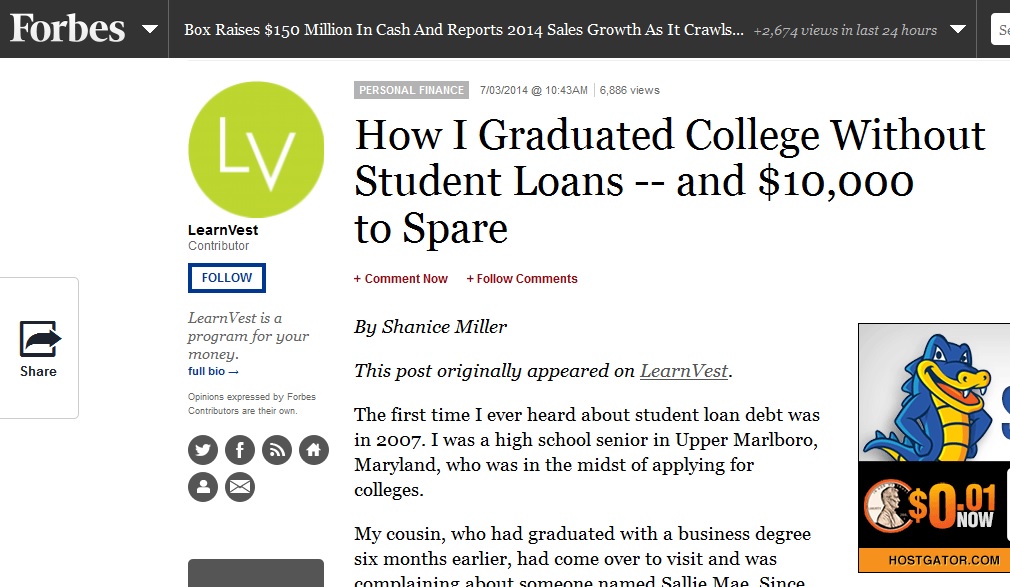 This is the first time I’ve completely detailed my journey— even listing all of the scholarships that I received— to graduate college debt-free. It was a struggle, but I’m so glad that I stuck with it and did it.

AND I’ve been trying to get published in Forbes for months now so this is a big accomplishment for me.

As with scholarship winning, persistence and determination surely pays off!

Just in case you missed the article, here it is:

How I Graduated College Without Student Loans — and $10,000 to Spare

The first time I ever heard about student loan debt was in 2007. I was a high school senior in Upper Marlboro, Maryland, who was in the midst of applying for colleges.

My cousin, who had graduated with a business degree six months earlier, had come over to visit and was complaining about someone named Sallie Mae. Since getting her degree, she hadn’t been able to find a job—and was struggling to make payments on her $9,000 of student debt.

I wondered: Who in the world is Sallie Mae?

After hearing my cousin’s explanation—that Sallie Mae was a company that gives students money to attend college—I was shocked, worried and confused.

I’d never thought critically about the costs associated with going to college. Everyone—family, teachers, friends and even my guidance counselors—just told me I needed to attend in order to secure a better future, which I could do by choosing the school that offered the best education. But it hadn’t occurred to me that I’d have to pay for that privilege.

My mind started racing: How would I ever be able to afford college? The housing bubble had just burst, and I knew my mom, a real estate agent, wouldn’t be able to contribute. What would happen if I couldn’t come up with the money? Would I still be able to get a good job?

I knew I had to come up with a plan—quick.

My Panicked Search for Scholarships

The idea of scholarships had crossed my mind before, but I hadn’t applied to a single one.

I’d heard good students were automatically awarded scholarships from the colleges they applied to—and although I was nowhere near being the valedictorian of my class, I planned to wait and see what I got.

But now that I’d realized how important it was to cover some of my college costs, I was worried I’d made a mistake. It was already March. Did I wait too long to apply and miss the scholarship boat?

In a panic, I went on FastWeb.com, a scholarship database, filled out the 30-minute questionnaire and sifted through the endless pages of scholarships I was deemed “eligible for.” But after four hours of searching, I still hadn’t filled out an application.

Eventually, I found a few to apply for—the Coca-Cola and Gates Millennium scholarships I’d heard advertised on the radio, as well as the Ron Brown and Essence scholarships from my school—but I never got a response. I started to feel like I wasn’t good enough to win scholarships. All I could do now was hope the colleges I was accepted to would give me some money.

Towson University—what my guidance counselors called my “safety school” because my GPA and SAT scores were higher than the average incoming freshman’s—awarded me a package of seven scholarships and grants covering the $20,000 it cost to attend. I received the Academic Competitiveness Grant for $750, the Educational Assistance Grant worth $3,000, the Pell Grant worth $5,645, the Provost Scholarship for $4,000 and three other Towson Merit Scholarships totaling $7,000. I felt like I’d hit the lottery.

A Scholarship Snag Inspires Me to Win More Money

Armed with an award letter indicating my scholarship package would cover all costs of my college education, I was set. Or so I thought.

A week before school started, I received a letter in the mail stating I owed $2,000. Puzzled as to why, I thought back to when I accepted all of my awards online—and realized one of the boxes had been grayed out.

At the time, I didn’t think much of it and just assumed it was an automatic scholarship. Well, I was wrong. I should have called the financial aid office to tell them I couldn’t check the box and ask what I should do to make sure it went through.

So I called Towson’s financial aid department to see if I could recover the award—but the money was already gone. Frustrated and upset with only a week before I moved into my dorm room, I took $1,000 from the money I’d earned during the summer as a bank teller, along with some money from my dad, and paid my balance.

Although I was back on track, losing the scholarship taught me a valuable lesson: It wasn’t enough just to barely cover my costs—I needed more in case any other scholarships fell through. So I started researching private scholarships, knowing that if I won enough money to cover tuition and fees, I wouldn’t be in the same predicament again.

I started by asking friends what scholarships they received and found out about the Delegate and Senatorial scholarships offered by the state of Maryland for residents who chose in-state colleges. I requested an application, filled it out, wrote an essay and mailed it back before the deadline. A few months later, I received a letter in the mail congratulating me on winning the $400 Delegate Scholarship.

Feeling like I could conquer others, I invested even more time researching scholarships, garnering a few, little-known secrets in the process, like how your chances of winning a local scholarship are greater because they’re less publicized and fewer people apply. I was back on the path to graduating with no debt.

Unfortunately, after just one semester, my time at Towson was coming to a close. I’d decided to change my major from graphic design and accounting to dental hygiene, and since Towson didn’t offer the major, my advisor suggested I transfer.

By the time I made the decision to switch schools, it was too late in the semester to apply to another four-year university with a dental hygiene program, so I decided to enroll in community college. I was concerned I wouldn’t get as good of an education, but I didn’t want to waste another semester—and I knew my credits at the community college would transfer to another university when it was time.

I saved money on room and board because I moved back home and commuted to school. I also still had my grants and scholarships from the state, and even though they were reduced, they actually provided me with more money than the cost of attendance. In February 2008, I received my first $975 refund check. In the fall of my sophomore year, I received another one for the same amount.

Soon, it was time to apply to the dental hygiene program at the University of Maryland Baltimore, and I knew I had to prepare—the school would certainly be more expensive than community college.

In the end, I was awarded more scholarship money than the cost of attendance, and as a result, received refund checks back each semester, totaling over $10,000 in the last two years of my college career.

The Beauty of Being Debt-Free

Graduating with no college debt was certainly a struggle. There were times when I considered giving up or taking out a loan when I wasn’t hearing back from scholarships as quickly as I would have liked.

Everyone tells you not to worry about college debt because it’s an investment in your professional career. But shouldn’t we also be thinking about our financial future?

Taking on debt certainly would have been easier, but I would have started my life worrying about Sallie Mae like my cousin, instead of figuring out what was most important to me—like buying a house, which is exactly what I did three months after graduation.

I used the $10,000 I received in refund checks for the down payment.