Student loan debt is getting out of control!

According to the Wall Street Journal, “Americans 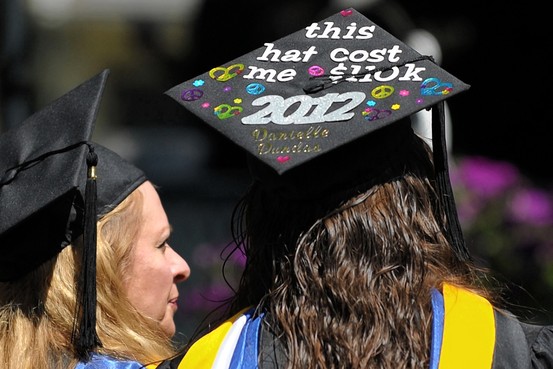 are borrowing more to pay for college.” By the beginning of 2012, Americans owed $904 BILLION in student loan debt which is an 8% increase from just last year. So who is to blame for all of this student loan debt?

Are colleges to blame for this excessive student loan debt?

With rising tuition and fees which cause the students to borrow more just so they can stay in college and get a degree to hopefully get a “good” job when they graduate, it is a possibility.

Or is it the government’s fault for all of this student loan debt?

The government should be increasing the amount of grants given to students to help balance out and help the students keep up with the increasing college costs, right?

Actually, the PARENTS are to blame for student loan debt!

When I was in college, I encountered too many students who chose the college they attended just because their friends were going there or the campus looked nice or “it was far away from home.” The truth of the matter is soon-to-be college students don’t really take into consideration the cost of the college. At that age, they are just so excited to go and are only thinking with their emotions. The mounting student loan debt that they sign up for each year isn’t quite real yet. It just seems like another form that they have to fill out in order to take college classes. It doesn’t get “real” until Sallie Mae sends them a paper in the mail stating that their first student loan payment will be due 6 months after graduation and by that time it is too late. They have acquired $30,000 or $60,000 or even $120,000 in student loan debt (not including interest) and don’t know where they are going to get the money to pay it back with the entry-level positions that they have accepted.

Parents, you HAVE to be the ones to think logically in this situation. Sit down with your soon-to-be-college student and have them understand the cost of attending the college they want to go to. Compare it to the costs of some of the other colleges that they were accepted into as well. Have your child understand that the cost of attending the college is for each year, not the entire 4 years. So if you have to take out student loans in the amount of $15,000 this year, you need to multiply that by 4 (at the very least) so their total student loan debt will be $60,000 that they will have to pay back, not just $15,000. Even tell them how much the monthly payments will be that they will have to pay back so they understand and are aware. Parents, you MUST get your child to think about the future, not just the present. Right now, they are just signing a paper. But in the future, that signature is going to cost them more than they ever imagined.

By: Shanice Miller, Founder of DebtFreeCollegeGrad.com